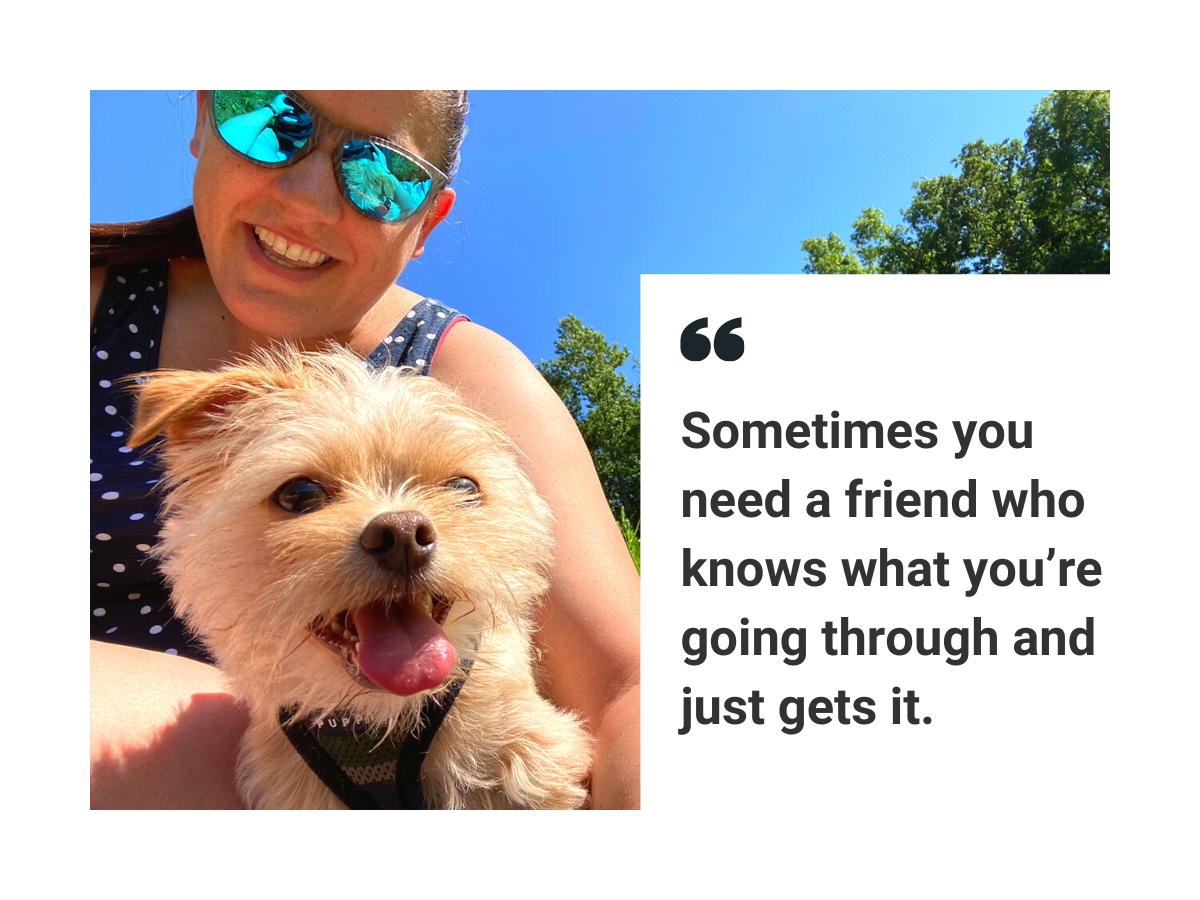 Let’s just say that I got really lucky in 2019 when I decided to attend the APFED (American Partnership for Eosinophilic Disorders) Patient Conference. The very first person I met at the conference was Amanda, one of the only other adult EoE patients also in attendance. We were both recently diagnosed and going through similar experiences, learning how to live with EoE and the unique challenges that come with the disease. At the end of the conference, we exchanged phone numbers and have supported each other through the ups and downs of living with EoE ever since. Thank you, Amanda!

Can you describe your path to diagnosis?

My path to being diagnosed with EoE was long and complicated (to say the least). Unfortunately, I think a lot of other EoE patients have a similar experience because it is such a rare disease and can be mistaken for other diseases like GERD.

I had my first endoscopy in May 2018. The gastroenterologist immediately suspected I had EoE and I will never forget him saying “eosinophilic esophagitis” for the first time. My mom had taken me to the appointment and when we spoke to him after the endoscopy. I still felt a little off from the anesthesia and even my mom, who was sitting next to me, asked politely, “Excuse me?” I remember she asked the doctor how to spell it so that she could write it down. After I got home and took my usual post-endoscopy nap, I remember we searched for EoE on the internet and tried to figure out what it was because I had never heard of it before.

While my first gastroenterologist suspected EoE, it actually took me nearly one year to have what I would consider an “official” diagnosis at the age of 34. I ended up changing gastroenterologists after my first endoscopy to find a closer doctor to where I live. The second gastroenterologist I saw was torn between EoE and GERD after my next four endoscopies with her, and that was when I went to get another opinion at the University of Pennsylvania’s Esophageal and Swallowing Disorders Program.

The gastroenterologist who I see now at UPenn has been a lifesaver and one of the things she said to me during my first appointment was — “You definitely have EoE.” It was comforting and reassuring, in some way, to have a doctor give me such a concrete answer after a year of searching for answers.

What symptoms led you to seek medical care?

My worst symptom was constant, unrelenting, pervasive, maddening, aggressive acid reflux. Did I use enough descriptors? The reflux was awful and would wake me up at night from choking and coughing, and I considered it to be a “good day” if I could make it to 10 a.m. without experiencing any reflux. Most days, I would wake up with reflux in the morning and it would just get worse throughout the day. It felt like it was bubbling up into the back of my throat and I could hear it crackling sometimes. It was so uncomfortable.

I tried every over-the-counter medication I could find, changed my diet, and made all of the lifestyle changes I could find recommended on the internet, but none of it worked or alleviated the reflux. I also had significant nausea, stomach pain, and some issues with swallowing food. Thankfully, I never had a complete impaction with food getting lodged in my esophagus, but I had a few instances where food would get stuck for a moment and slowly move through my esophagus, which can be scary. The reflux was definitely my worst symptom and what prompted me to seek treatment. I first went to my primary care doctor and he prescribed Omeprazole. Once we realized I could not take that due to side effects, he referred me to a gastroenterologist.

What do you find to be the most life-changing aspects of living with EoE?

Right now the most difficult aspect is the amount of medication I need to take each day just so I can eat comfortably. I currently take a swallowed steroid (Budesonide) and it is not very portable because it has to be mixed with honey right before taking the medication. Pre-pandemic it was annoying to go out to eat and have to mix my medicine at the table after I was finished eating. I made sure to always carry a small dish, spatula, honey, and the Budesonide in my purse if I wanted to go out to breakfast or dinner.

Although it is frustrating to have to take medicine multiple times per day just to eat without symptoms, I am extremely thankful that my EoE is in remission and I can eat everything. I think another difficult aspect is the worry that comes along with EoE. I have tried so many treatments and they have all failed after a few months, so this is the longest I have gone with one treatment that has continued to work. I feel like sometimes I am waiting for the other shoe to drop and for this treatment to not work anymore.

Many of your symptoms are triggered by environmental and chemical allergies. Can you describe how this has impacted your day-to-day?

I am definitely convinced that my EoE triggers are from environmental and chemical allergens since after trying several elimination diets my EoE never improved.  It seemed like no matter how I adjusted my food it did not affect my EoE. I have discussed it with my allergist and gastroenterologist and they both agree it is a possibility too. Many of the EoE moms I met at the APFED Patient Conference said they usually don’t have their children do endoscopies and trial treatments during the spring when environmental allergies are usually at their worst.

After I was diagnosed with EoE, I went through a period of time where I was getting hives that would appear, disappear, and reappear throughout the day. After doing patch testing with my allergist, we figured out that I have allergic contact dermatitis and am allergic to a host of chemicals and ingredients commonly found in most products we all use.

That diagnosis affected my day-to-day life tremendously because I usually get hives on my hands or any exposed skin on my arms whenever I leave my house, which is my safe zone. All of the products I use in my house are safe for my allergies, but when I go out in public I am usually exposed to cleaning products and other chemicals that will trigger my hives.

As an adult, I definitely faced challenges at my work and especially when I was trying online dating. Online dating is difficult enough as it is, right? But it became even more difficult for me when every date usually revolves around food or drink. I never wanted to explain EoE to a new person on a first date, so I think unfortunately it deterred me a little bit from dating as I was trying to get the disease under control. I never trusted eating out while I was on an elimination diet, so that really limited my options in the dating world.

At work, I experienced similar difficulties when colleagues or clients would want to go out to eat. I didn’t want to explain EoE to “work” people because I tend to be very private with my personal life at work. It was also challenging because even if I could avoid explaining, people would always ask questions if I didn’t order food or just had a coffee at lunch.

Any tips for balancing living with EoE while working in an office environment?

My biggest tip would be to make sure you have everything you need to be comfortable at work and to not put too much stock into what other people think. At my current office, I have all of my own “safe” cleaning products at my desk so that I can keep my own space clean and free from other cleaning products. Previously, I always got hives from the products they used on my desk so I just notified my boss that I had allergies and did not want anyone cleaning my office. Luckily, my current boss is great so of course he agreed and didn’t ask me too many questions.

When I was on the elimination diet and had to go out to eat with a client, I would just simply say I had allergies and it was too difficult for me to eat out. People usually respected that response and didn’t ask me too many questions, but it was definitely hard at first. A couple of times I tried to bring my own food to restaurants, but many restaurants will not let you do that, so I would just have a coffee. Although it felt isolating and strange, I realized I had to advocate for myself and not worry about what other people think, which is of course easier said than done.

What have you learned living with a rare disease?

I have learned not to take my health for granted. I never really thought about it before EoE affected me and my ability to eat. I try to be more appreciative of life, in general, and eating food, specifically.

I know it may sound dramatic, but I truly appreciate that my diet is unrestricted because I realize my EoE and treatments may change and who knows what the future holds, so I have to just be appreciative now for what I can do. I think it is important to be appreciative and always advocate for yourself in your daily life and with doctors. Advocating for yourself is especially important when you have a rare disease because the path to diagnosis can be extremely difficult.

It will get better. Find a gastroenterologist who is well versed with EoE and the most recent treatment options and research. That is the most important advice I can give. It helped me so much to find my current doctor and significantly reduced my stress level because I know I can rely on her and what she tells me.

I would also say to get involved with APFED or other groups dedicated to eosinophil-associated diseases because it helps you feel less isolated. If you’re as lucky as I am you might also make a friend who will turn out to be your biggest source of support. Sometimes you need a friend who knows what you’re going through and just gets it.

I am proud of myself and my ability to have such strong willpower to complete the various types of EoE treatments I had to do (elimination diet, new medication, etc.). I am also proud of how I keep everything in perspective and try to keep a relatively positive attitude despite the EoE diagnosis. I try my best to be resilient and live life to the fullest. 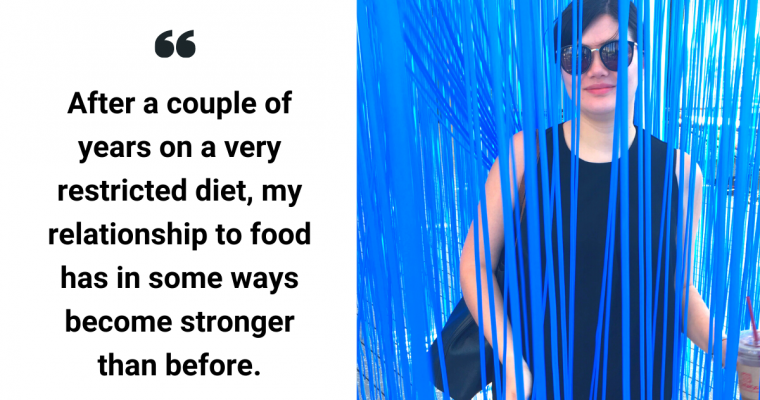 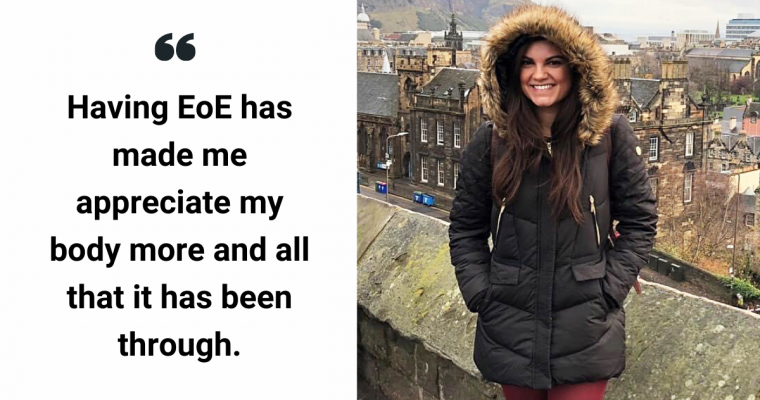